The Geology of Maldon Town is fundamentally London Clay but topped with a layer of glacial sand and gravel allowing for early shallow springs and wells, prior to drilling through the London Clay to the water bearing chalk beneath.

Initially  people were obtaining their water from ponds, and springs, around the Town.  According to the a Tythe Map of 1838, apart from the Ware or Public pond in Spital road, there were several in the immediate area, all spring fed. At least three were for irrigating orchards, there was one at The Friary, and another just off Back  Lane.

Thomas Cammock, in 1587 improved the Cromwell well supply in Cromwell Close by  installing a lead pipe to carry water from a public spring and shallow well in Beeleigh road, to a lead lined tank and hand pump in Cromwell Hill, which was then known as St Ellen’s Lane, closer to the town market place. This was to improve the existing supply in Cromwell Close, which was insufficient to supply his Mansion and the local population.The existing springs were gathered in a covered well head which gravitated to the lead cistern. A current unused replacement pump from 1908 still exists on the site.

His effigy along with two wives and seventeen children is to be found on the wall inside All Saints Church. Water overflowed From the tank or cistern down the hill to be used by merchants who were issued with licences for the purpose. In 1640 a Thomas Patten received a lease for 10 years, and in 1653 a Robert Banyard from Bermondsey applied for a licence  to use the water at his tannery at the bottom of Market Hill. This Spring supply was given a clean bill of health by the Medical Officer of Maldon in 1860, but then became insufficient due to the increase in population, and polluted from cesspits, from properties up hill. 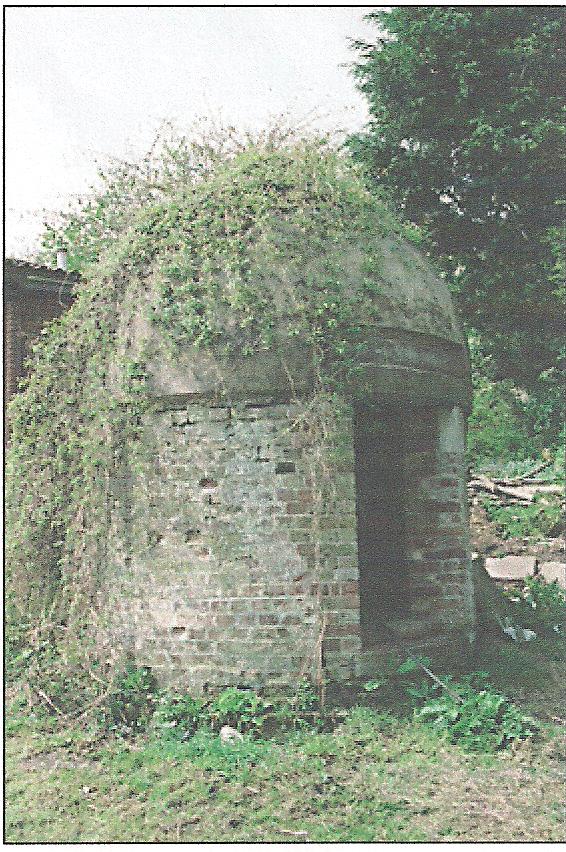 The well head has been rebuilt by the owner, in keeping with its original design. 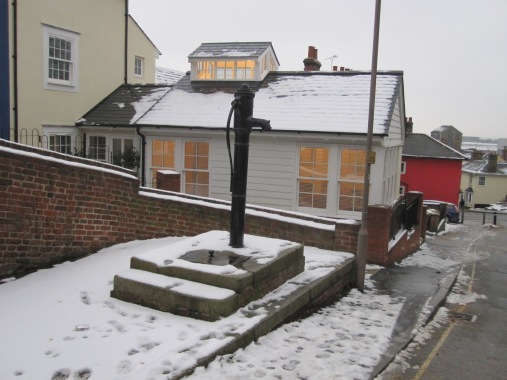 In December 1694,  Thomas Stace  bought some ground on the Fullbridge Street from the Corporation, containing a well. He then had an agreement that local citizens could take water from the well free, unless using a horse drawn butts or containers. It was then charged at one penny per butt.

It was not until the early 1860’s that boreholes were dug down to the chalk, in Wantz Road for  a flour mill, which was then used for public supply  in 1862, after being deepened to 290 ft. This was followed by wells in Spital Road the first in 1870, 5ft in diameter and 234 ft deep. A second well was dug in 1911 6ft diameter and 200 ft deep bored to 634 ft deep. A small reservoir behind the well site was built to smooth out peak flows. They were initially pumped using steam driven pumps. There were additional wells supplying such as The workhouse ( now St Peters Hospital), Gray’s brewery, a Flour mill, Warren’s Foundry, Northey Island the Railway Station, and of course Bentall’s at Heybridge. From 1868 to 1880 Boreholes at Bentalls supplied not only the works but greenhouses growing cucumbers, melons and a vinery. In 1942 a 30 year agreement was signed to also supply the local population of Heybridge.

In the 1862 the Maldon Water Supply Company was also set up, in  1997 there was transfers of Debenture Bonds from Mary Jane Foster of Great Totham to Thomas Handley Barbrook of 34 Market Hill and  Susannah Harvey Baker of Langford Mill, to Sam Lewin and William J Strutt.

In 1898 Royal Assent was Granted for the Maldon Corporation to take over the Maldon Water Supply Company.

In 1936 there was a proposal to rebuild the wooden timber framed pumping station in brick, and replace the gas engines with oil fuelled. An electric submersible pump was also to be installed, alongside the existing triple ram pumps.

In Spital road there was also a covered reservoir and land nearby for a tower. The wells, purchased by the Corporation in 1899, supplied only the Borough, with a population of 5383 in 1891. In 1899 it was reported by the Medical Officer of Heath that higher houses often were without water for a day or two, and in localities inhabited by the poorer classes there was no supply on Sunday!!

The Borehole building in Spital Road, which has been converted into a house but with the well still present under the floor visible though a glass panel (DNW)

In 1899, the Borough Engineer reported to the Council that:-  Tenders had been sent out to lay mains in Spital Road, An application had been received by a Mr A.C Sargeant to extend water supply to two WC’s at the rear of 27/01 in North Street with a cistern and flushing tanks.  The service recently laid to Mr Wade’s cottages have had to be repaired caused by a Traction Engine  going over and stripping the threads from the main.

A delay in serving the town with water caused, by leakages in Spital Road, was caused by  the men engaged for the repair, having struck for higher wages. The aid of the Borough Surveyor was solicited, to allow his men to open the road to effect the repair.

In 1933, a bulk metered supply was made available from the Southend Waterworks Company, and a Tower was built in Cherry Garden Road. The SWC supply was only used sparingly as it had to be paid for by the Council. Both Spital and Wantz Road wells were permanently shut down in the mid 1970’s with all water supplied from Langford via a new covered storage reservoir in London Road.

Teeth affected by a high Fluoride level in borehole water.

Due to the high level of Fluoride in the Maldon boreholes, Maldon residents developed discoloured teeth which were resistant to decay, and which appeared to be peculiar to Maldon. A Government inspired investigation took place in 1922 involving school children to identify the cause. this was only apparent where people received neat borehole water. Where it was mixed with the SWC supply the discolouration was not apparent. As the population grew the dilution became greater until, it ceased altogether. The observed decay resistance  eventually lead to fluoride tablets for children, and fluoride currently being added to most toothpaste.

Maldon Rural District Council
This comprises 32 parishes with a variation in population ranging from 111 to 1700 in 1901. Woodham Mortimer, Althorne, Latchingdon, Purleigh, Stow Maries,  Hazeleigh and Mundon,  have no shallow well or spring supplies due to lack of shallow gravel strata. The area elevation ranged from 20ft at Purleigh Wash to 173 ft at Hazeleigh White Hart,  above sea level. A source had to be found above 200 ft above sea level to allow distribution without pumping.  However many private deep wells were dug to supply farms and properties away from the Maldon distribution system.  A few are still in use across the Dengie Peninsula, which are monitored by the Environmental Health Department of the District Council.
In 1897 a scheme was introduced  by Maldon RDC for a  waterworks situated at Woodham Walter, at a cost of £13,000. Springs at Warren Bottom and Jacob’s Well were collected in a tank and using steam driven pumps, the water was  pumped to a reservoir opposite the entrance to the  Warren Golf Course, and then gravitated through to Althorne supplying 8 parishes. 597 houses were to be supplied that were within 200 ft of the water main. Cottages to be charged at 2p per week and farms 9p to raise £260 per annum.  Isolated properties were supplied by a man with a horse and cart, twice a week at a farthing a pail. 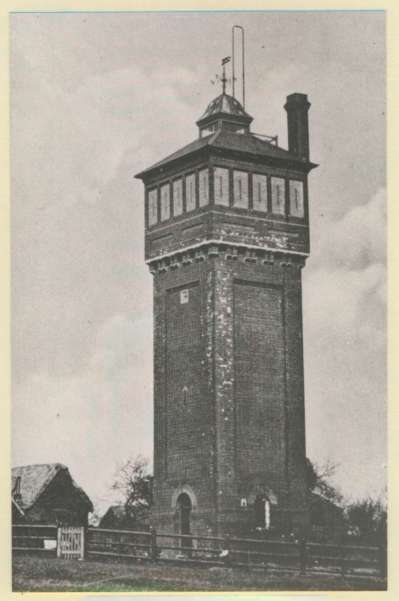 In 1905, water for the school at Mayland, had to be carted over half a mile from a standpipe at Althorne, as the cost of extending the mains from Purleigh being considered prohibitive. Also in Tollesbury there were three public wells, and very many private wells, with the supplies being deficient and unsatisfactory quality. An adequate public supply was an urgent necessity as there was insufficient water to flush the sewers. There as one deep well on the marshes sunk to supply cattle. The light Railway from Kelvedon had also just been completed.

In 1677 John Stanley of Burnham was in court for keeping a hogsty near the water course, that supplied the town well, making the water  unfit for use

In approx 1889, a small waterworks was created from shallow tube wells and a reservoir in the gravel. This rapidly became insufficient and Burnham Urban District Council formed in October 1898 approved a deep well to be constructed for commissioning in 1901. This was 420 ft deep into the Thanet sands with 11.5 inch pipes almost to the bottom. As this terminated in the Thanet sands and not the Chalk, sand being pumped into supply was a continuous problem and a small reservoir acting as a sand filter was constructed along with a water tower. The supply was augmented in 1960 by a supply from the Langford works, when the  12 inch main supplying Bradwell power station was laid. Soon after the Essex Water Company was formed in 1971 taking over responsibility for this area, the underground supply was terminated due to the sand problem and midge penetration of the sand filter. The area surrounding Burnham is supplied from water from South Essex via the Cold Norton and St Lawrence Towers.