A Pictorial Journey inside and around the Rock.

DNW  Our Man in Gibraltar

In  2002 DNW was  despatched to Gibraltar to assess the drinking water quality  for compliance with EEC regulations, and propose necessary additions/modifications. A plan was drawn up with engineering colleagues, to dose lime and carbon dioxide to add minerals to the low mineral content desalinated water. This was shelved by the Gibraltar authorities until such time as they were compelled to instigate it.

However the 90 year old water corrugated iron catchment was closed down along with the shallow wells adjacent to the airport runway. The catchment, due to the large amount of gulls excrement deposited, and the wells due to poor water quality and airport expansion.

Gibraltar is a limestone promontory connected by a short sandy isthmus to southern Spain. It faces the Mediterranean  Sea, which at one time in history dried up, and  was part of the north African desert.

The first actions to provide a water supply system for Gibraltar can be traced back to the Moorish Period 711 to 1430. Several wells  have been identified to that period and an artificial well/reservoir known as the Nuns well, which was an underground arched chamber into which surface water was collected. There was also an aqueduct which ran from the wells to the baths and accommodation areas.

The Spanish period then followed until 1704 when Gibraltar was captured by the British. During the Spanish period more wells were constructed an another aqueduct in 1571, total length 4000 ft, conveying water to the town centre.Two underground reservoirs of 15,000 and 8,300 gallons capacity were constructed at Rosia Road. These received rain water and ground water seeping from the Alameda sands. A further reservoir of 7,800 gallons was built in 1694, and a fountain in the town centre.

The British period, After the capture of Gibraltar in 1704 there was no public water supply. with the population fended for themselves using the Spanish Aqueduct/Fountain of brackish water. Around 1853 underground tanks collecting rain water from the roofs were constructed in the barracks and private dwellings. By 1863 there were 136 dwellings with underground tanks catering for the needs of 4,497 persons for ten months of the year at 1.5 gallons per head per day. A further 179 houses containing 2,775 persons used 1.5 galls per day from the old Spanish fountain and some wells, conveyed in buckets and barrels. A further 133 houses had water  from wells yielding only brackish water, ie slightly salty, of 1 gall per day. Water became even scarcer when many private wells and the Spanish aqueduct were closed down to curtail a cholera epidemic. 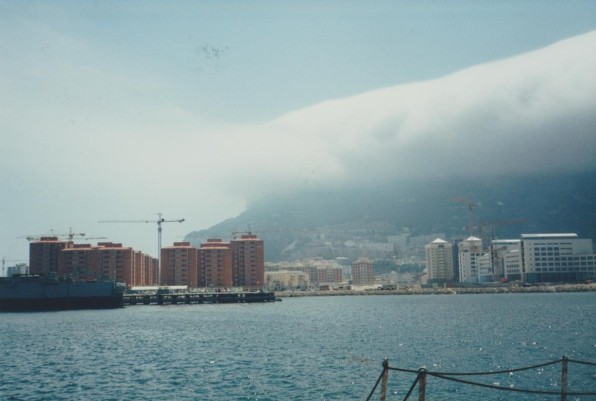 Rain clouds over Gibraltar, the main source of fresh water until 1956

In 1863 a British Parliamentary Commission on Barack and Hospital Improvements enquired into the sanitary conditions at Mediterranean stations. They were informed that “The inhabitants of Gibraltar owe nothing to the British Government for the small supply of water they have suffered for 150 years.

The Commission reported that there was not one water pipe in the town, other than the old aqueduct. Also proposed that an area of rock above the Moorish Castle area be stripped of vegetation and prepared to collect rainwater  and fed into a 1.25 million gallon reservoir, constructed of masonry and concrete. The Sanitary Commissioners of Gibraltar were set up and tasked with laying on a piped water supply to the community. By 1869 it was also mandatory for all new dwellings to have an underground storage tank. A sandy aquifer was found on the isthmus between Gibraltar and Spain and wells, a pumping station were constructed to pump water to the reservoir at Moorish castle and Europa road areas.

However these wells soon with increased extraction soon became brackish, drawing in sea water, and were confined to sanitary use such as flushing toilets. The collected rainwater being used for drinking and domestic use.

From this developed the dual supply and distribution systems. One for potable water and one for sea water. Sea water is used for Fire fighting, Street flushing,sewer flushing and other sanitary purposes where potable water is not required. The water from the condensers of steam machinery used to lift the sea water to the reservoirs provided some 10,000 galls per day in the late 1800’s, and was the first attempt to produce fresh water from the sea.

Between 1898 and 1900 four reservoirs were excavated from the West side of the rock being 200 ft long, 50  ft high and 20 ft wide with a total capacity of 5 million galls and at an elevation of 340 ft above sea level. The reservoirs were lined with bricks and made  impervious . The reservoirs were fed with rain water collected on the North West slope and conveyed through open channels and pipes. 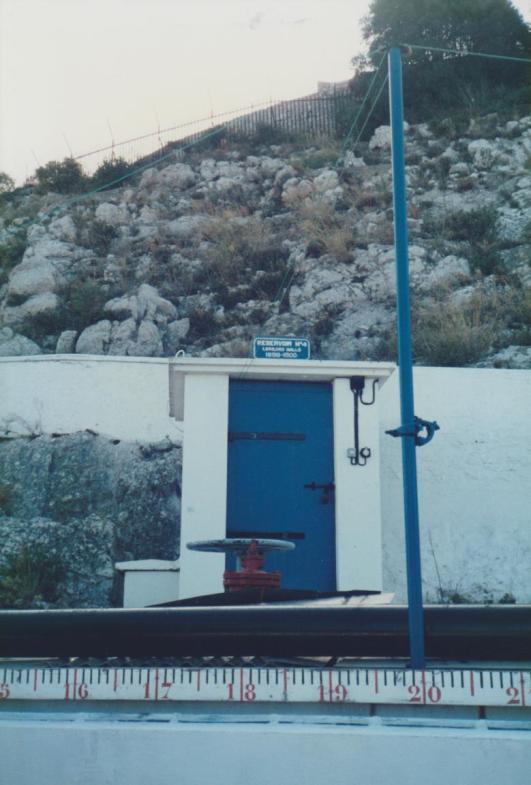 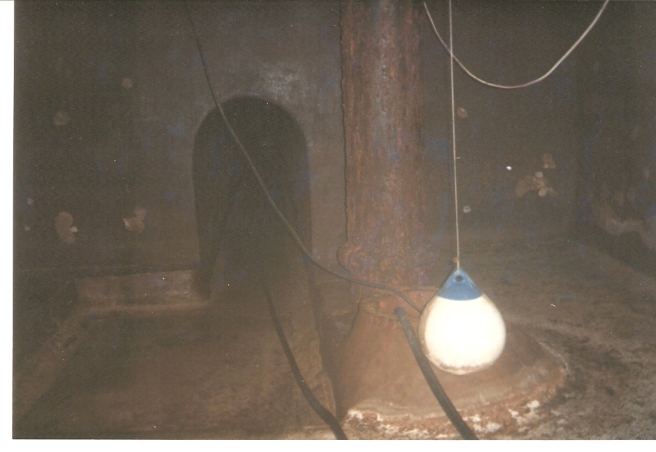 Interior of Reservoir No 4, note width only 20 ft 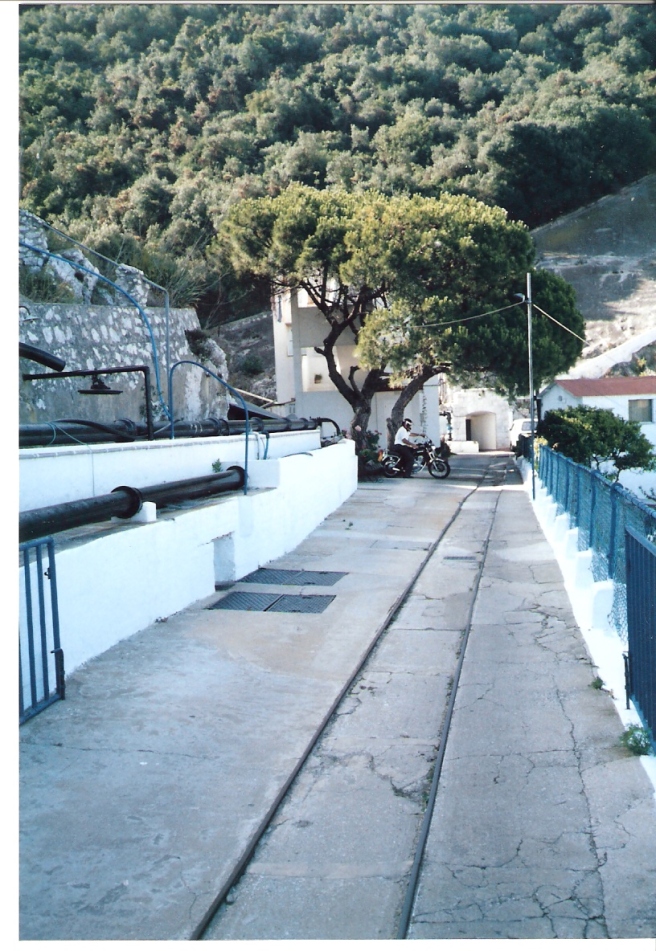 The half mile  East to West Tunnel Entrance 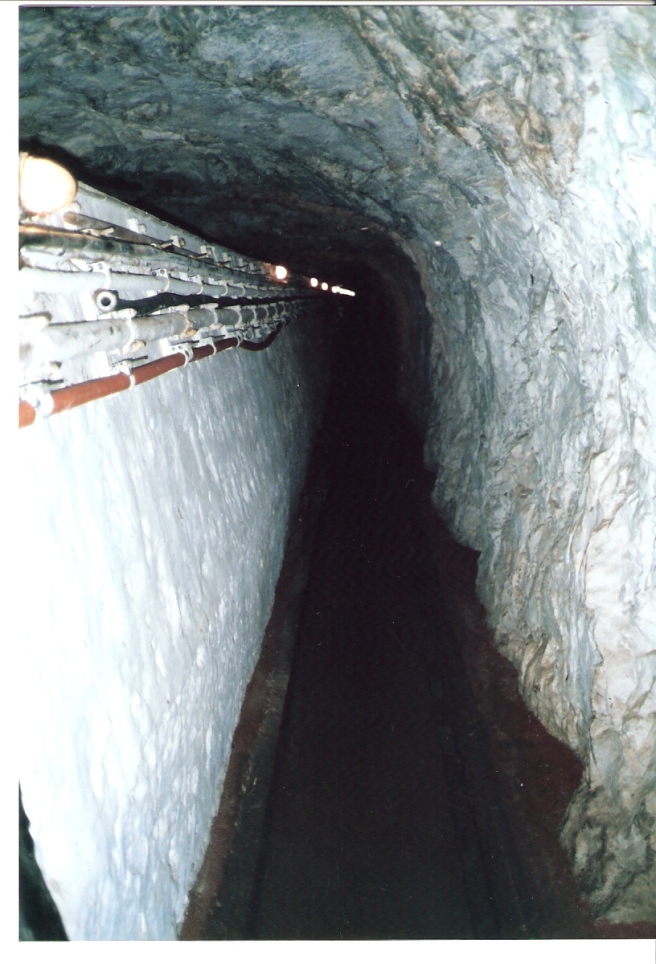 The East to West Tunnel leading to the reservoirs 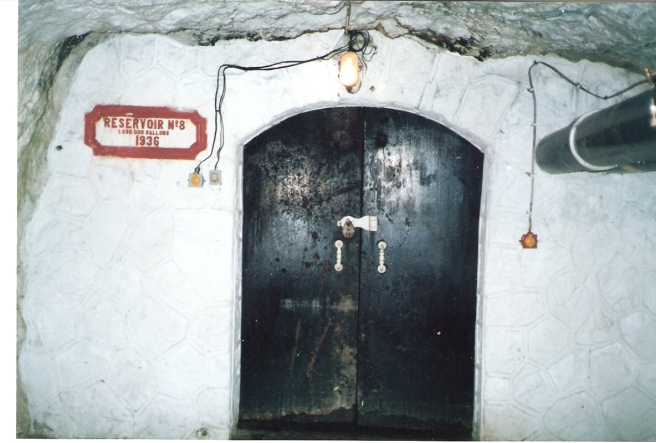 Between 1911 and 1914 reservoir No 5 was excavated, by enlarging a tunnel driven parallel to the East West Tunnel and 25 ft below. The reservoir was 40 ft high,43 ft wide and 400 ft in length containing 2 million gallons.The floor and walls were made watertight and the roof left as it was.  In 1928 Reservoir No 6 was added, similar to No 5 but holding 1 million gallons, and between 1928 and 1945 reservoirs Nos 7 to 11 were added adding a further 4 mill galls. Reservoir No 10 which was excavated but not completed at the time of World War 2 contained a barracks built to house a detachment of the “Black Watch” regiment under bomb proof conditions. During 1958 to 1961 the last reservoirs no 11 and 12 were constructed.These plus the Moorish Castle reservoir provided a total storage capacity of potable water of 16 million gallons. Outlet valves for supply and cleaning are operated from within the reservoirs, and overflows to the natural fissure.

As the population and demand for water increased a further scheme was proposed which consisted of, Forming a catchment area of 10 acres on the sandy East slope and excavating a tunnel half a mile long, from East to West which  contained a channel to convey water from the East Catchment to the reservoirs on the West. This was the start of a unique system in the World which was commissioned in 1903, and closed down by myself in 1993.

Following large boulders being removed and the site overall smoothed, 470 timber piles 5ft by 6ins by 1.2 ins were driven into the sand, then a timber frame connecting them, and rafters, finished of by 2400 corrugated,  galvanized,iron sheets 8 by 3 ft were screwed on with 2600 lbs of screws and 758 lbs of washers. A footpath and collecting channel were also constructed at the base of the slope. The collecting channel was designed to convey a maximum of 4 ins  of rain per hour from an area of 37 acres. The access footpath incorporated was to act as an overflow channel fed by an overflow system from the reservoirs and piped down to the sea. The main channel in the East/ West tunnel can be valved so that water can be diverted down a fissure in the rock and eventually to the sea. Water from the first rains which wash the dirt from the catchment being flushed away in this manner, prior to flowing into the reservoirs. Around 1914 the catchment area was enlarged by another 14 acres.

In 1933 further investigations were carried out on the Isthmus which identified two aquifers, an upper of fresh water and a lower of brackish water, already identified.  Wells were sunk in the upper aquifer and water conveyed to Hesses Pumping station where it is chlorinated and pumped up to the reservoir complex. The water from these wells was hard with a high chloride content, but blending with the soft reservoir water resolved the problem.

The first distillation for production of potable water was in 1956 when a vapour compression distiller was constructed at Hesses pumping station. The distilled water produced was blended with well water to produce a water of acceptable quality The plant was not successful and in 1964  a 40,000 gallon per day vertical tube multi stage Flash distiller was installed at Kings Bastion Electricity generating station using waste heat from the generators diesel engines. The plant came to an end of its useful life in 1976,as a plant of 200,000 galls had been commissioned in 1969, followed by another plant in 1973. Both of these plants were replaced in 1984 by two Multi stage flash distillers at Watersport  providing 297,000 galls each, using waste heat from the Watersport generating station. 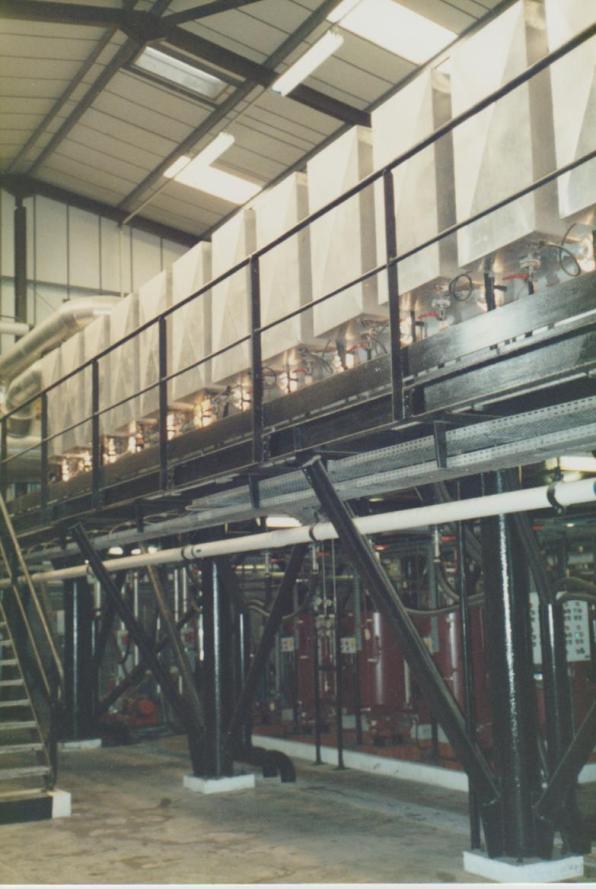 In 2001 a reverse osmosis unit was commissioned which produces distilled water by forcing sea water at high pressure though a membrane which removed the dissolved minerals. This requires high energy levels.

When the water supply was short, due to periods of  low rainfall, water was imported by tanker from Southampton each tanker carrying 4 to 5 million gallons, 22,000 m3

Currently, until relations with Spain improve, the water supply is totally from the sea by desalination. There is a dual supply to houses, with filtered sea water for flushing sewers, street cleaning  etc, and desalinated water for domestic consumption.

A Refuse burning distillation plant was also commissioned in 2001, but was shut down shortly after, due to a shortage of refuse. The political situation precluding refuse collection from the neighbouring Spanish town of Algeciras. A connection was also planned in 2002 to connect Gibraltar to Algeciras, where water was plentiful and cheap. This was abandoned by the Gibraltar authorities, who did not wish their supply to be controlled by the Spanish.

The above pictures show a cross section of the rock and water sources and reservoirs. Reservoirs 5 to 12 are treated as storage reservoirs and not in supply. Reservoirs 1 to 4 and Moorish Castle are service reservoirs  supplying, the upper town, South district and shipping. The Moorish castle reservoir supplying the lower town  and North/North east district. Chlorination is applied to water leaving the service reservoirs. The distribution system is divided into districts which are metered separately,  and read daily to detect leakage. Leakage is kept to a minimum, as the cost of production is high.

Sea water is extracted from two intakes, at the North West and South West of Gibraltar, from where it is pumped to various reservoirs to supply the population. It is also pumped to 1300 ft above sea level to tackle fires on the high vegetated upper rock area. The sea water distribution system parallels the potable or drinking water system and covers the whole of Gibraltar providing households and industry for cooling purposes sewer flushing tanks and street watering and fire fighting.  The old  mains were of cast iron and badly corroded were being replaced by non corrodable UPVC. 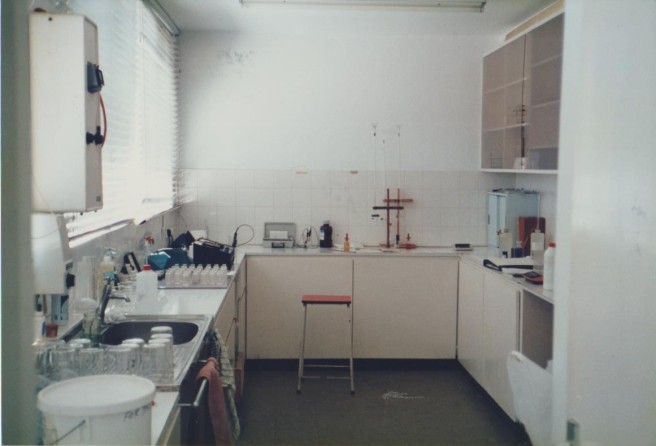 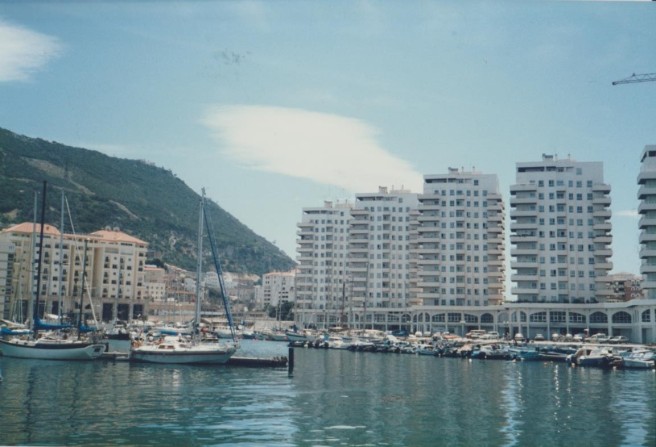 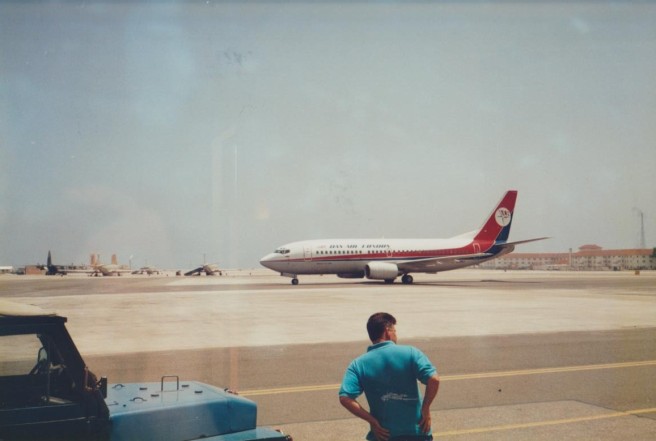 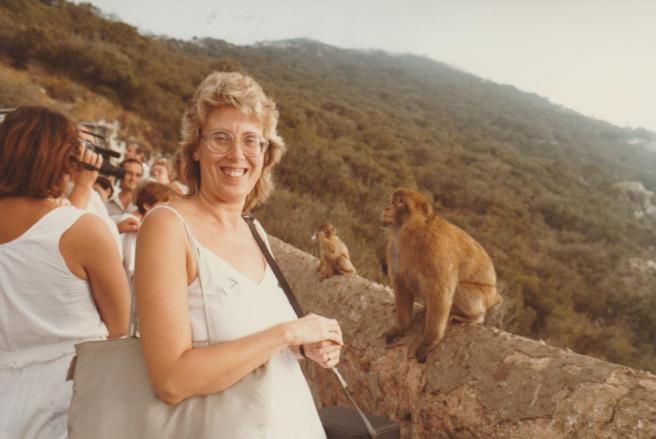 Photographs featured, taken by DNW were taken in the period 1993- 1995 and may not represent present times.